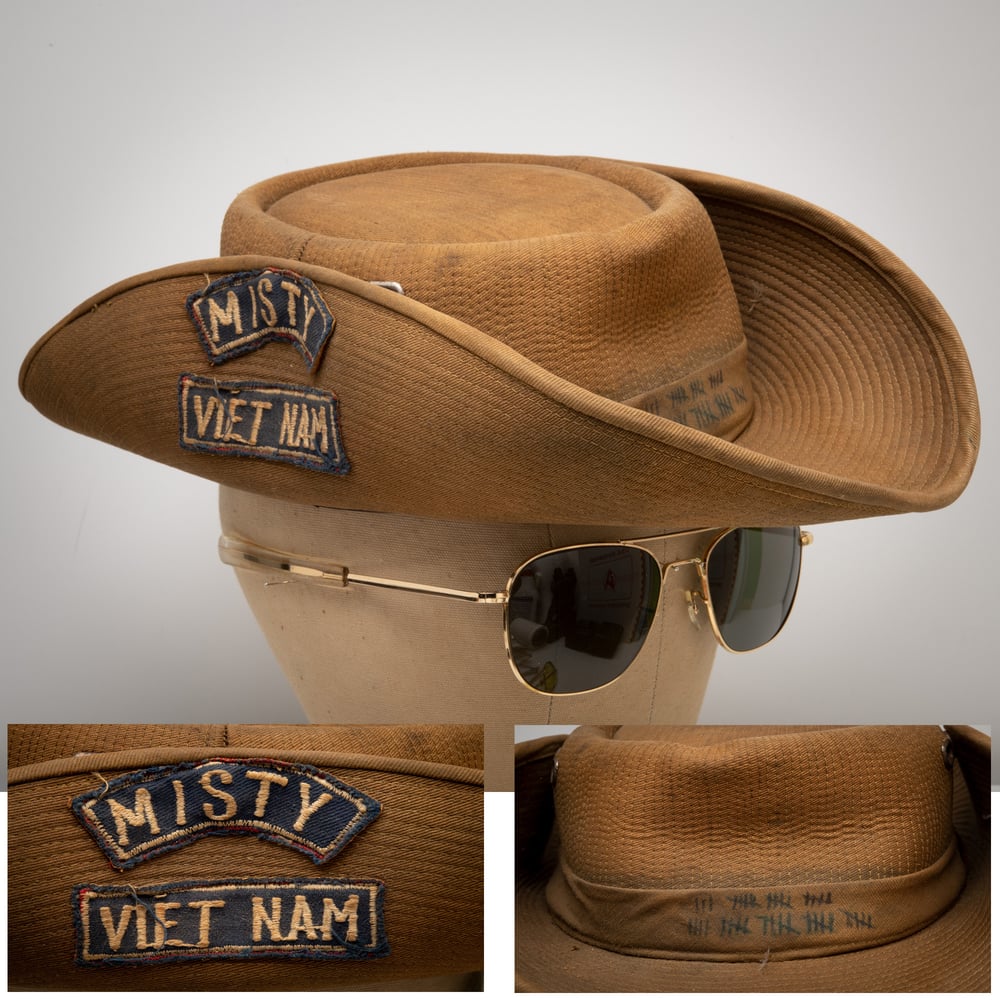 This hat belonged to Col James D. Weidman (Doug) a Vietnam F-100 Super Saber FAC Misty Pilot. Its a great rare piece of Vietnam pilot history, Col. Weidman was Forward Air Controller in Vietnam flying the F-100 Super Saber in 1967-68 came back to the states trained in the F4 Phantom and flew the F4 in Vietnam in 1974-75. A war hero who flew two of Vietnams most badass fighter jets. My friend who actually photographed him in Tucson was telling me some crazy story about him flying his F-100 upside down firing rockets into a NVA SAM site I think thats the story that related to his Silver Star. This hat came from his estate and if you collect Misty FAC pilot gear this is about as cool as you can get. This hat has his missions marked off on the front and back of his hat with a pen. Its has a perfect patina of Jet Fuel-low flying jet pilot sweat and F-100 Super Saber hydraulic fluid its a beauty!

Goes to the highest bidder, all sales final.

Doug Weidman was born on July 13, 1942, in Saint Louis, Missouri. He was commissioned a 2d Lt in the U.S. Air Force through the Air Force ROTC program at Southern Illinois University in Carbondale, Illinois, on December 18, 1965, and went on active duty beginning March 17, 1966. Lt Weidman next completed Undergraduate Pilot Training and was awarded his pilot wings at Laredo AFB, Texas, in March 1967, followed by F-100 Super Sabre Combat Crew Training from April to December 1967. His first assignment was as an F-100 pilot with the 612th Tactical Fighter Squadron of the 37th Tactical Fighter Wing at Phu Cat AB, South Vietnam, from December 1967 to December 1968, during which time he flew as a Misty Fast FAC from August to December 1968. His next assignment was as an instructor pilot with the 3516th Pilot Training Squadron and the 3510th Flying Training Wing at Randolph AFB, Texas, from January 1969 to 1971, with the 12th Flying Training Wing at Randolph from 1971 to May 1972, and with the 14th Flying Training Wing at Columbus AFB, Mississippi, from May 1972 to June 1974. During his time with the 14th FTW, Capt Weidman was attached to the U.S. Navy's Training Air Wing One at NAS Meridian, Mississippi, as a TA-4J advanced jet Flight Instructor and on the Wing Staff. After completing F-4 Phantom II Combat Crew Training, he returned to Southeast Asia as an F-4 pilot with the 555th and then the 25th Tactical Fighter Squadrons of the 432nd Tactical Reconnaissance Wing at Udorn Royal Thai AFB, Thailand, from December 1974 to June 1975. During this time, Maj Weidman participated in Operations Eagle Pull, Frequent Wind, and the rescue of the SS Mayaguez. He then served as an F-15 Eagle pilot and instructor pilot with the 71st Tactical Fighter Squadron of the 1st Tactical Fighter Wing at Langley AFB, Virginia, from June 1975 to June 1978, and during this time he completed his master's degree in Public Administration from Golden Gate University at Langley. He attended Armed Forces Staff College from June 1978 to January 1979, and then served as an F-15 weapons system project officer with Headquarters Pacific Air Forces at Hickam AFB, Hawaii, from January 1979 to February 1982. Col Weidman's next assignment was as Deputy Chief of Staff for Plans and as a plans and programs action officer with Headquarters Tactical Air Command at Langley AFB from February 1982 to May 1983, followed by service as Commander of the 83rd Fighter Weapons Squadron and Chief of the 475th Weapons Evaluation Group at Tyndall AFB, Florida, from May 1983 to August 1985. He next completed Air War College at Maxwell AFB, Alabama, in June 1986, and then served as an A-10 Thunderbolt II instructor pilot, Assistant Director of Operations, Director of Operations, and then as Vice Commander of the 355th Tactical Training Wing at Davis-Monthan AFB, Arizona, from June 1986 until his retirement from the Air Force on October 1, 1989. After his retirement from the Air Force, Jim flew for Northwest Airlines, flying Boeing 727s, 757s, 747s, and McDonald Douglas DC-9s and DC-10s. Doug Weidman was Misty 63.

First Lieutenant James D. Weidman distinguished himself by gallantry in connection with military operations against an opposing armed force as an F-100 Fighter Pilot in Route Package One, North Vietnam on 7 March 1968. On that date, Lieutenant Weidman was scrambled form the alert pad to attack a Surface to Air Missile complex that was protecting a huge truck storage park. Exposed to extremely intense antiaircraft fire and limited by terrain and ordnance load carried, Lieutenant Weidman made repeated low altitude passes on the missile complex destroying it and many of its supporting antiaircraft weapons. This opened the truck park to concentrated air attack. By his gallantry and devotion to duty, Lieutenant Weidman has reflected great credit upon himself and the United States Air Force.